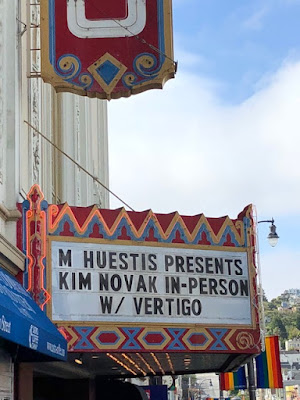 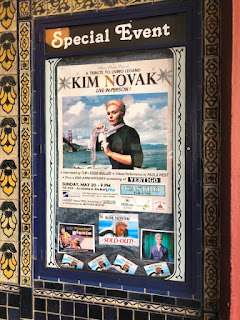 It was incredibly joyful and rewarding to see Kim greeted by sold-out houses and receiving at least three standing ovations in San Francisco at the Castro Theatre, and in Los Angeles at American Cinematheque's Egyptian Theatre. A big thank you to Gwen Deglise who produced the LA event and Marc Heustis, who came out of retirement to do his one, last event at the Castro Theatre. Kim was interviewed by Larry King in Los Angeles, and Film Noir's Eddie Muller in San Francisco.

New York is coming up this fall/winter.

Kim's primary interest, for the last many years, has been her art. Gorgeous slide shows of her art were shown at both venues as she described the paintings. If you want to see them, go to:
kimnovakartist.com 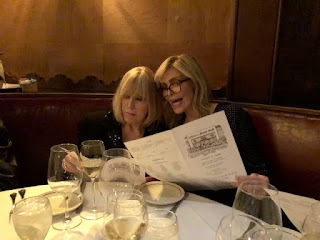 Kim and Shawn King peruse the menu at Musso's--where we celebrate everything!


Then, it was off to San Francisco---

After her fabulous interview, the audience watched VERTIGO. I  went to some bars with a couple of drag queens to check out the area. After the screening there was a party for Kim at the theatre, and then her guests celebrated with her at the classic bar, Twin Peaks. The next morning, friends and family all celebrated at The Buena Vista. We are insane over their Irish Coffees and Eggs Benedict. 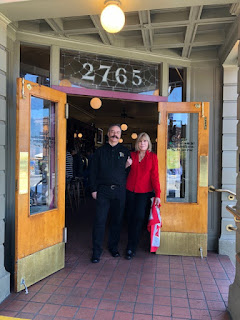 A personal aside---I had a couple of other adventures in San Francisco. My dear friend, Bradley James, is Mother Teresa's Choir Director. He lives in Rome, with the sisters in the convent, and also spends time in Palm Springs, San Francisco, and St. Tropez. He is also a marvelous singer, composer, and arranger. I met him at St. Paul's in San Francisco, the church where they shot SISTER ACT. I watched his rehearsal with the young nuns about to take their final vows. Then I was invited into the convent for silent prayer. It was so beautiful and moving. I'll never forget it. And, Bradley is truly an angel.

The next day, Bradley drove me to Mills College in Oakland. When I was looking at colleges in my senior year of high school, my mother refused to let me leave home to go east to the Ivy League schools. I thought a compromise would be Mills. When she took me there to look at it, I wanted go there more than any place in the world. I remembering telling her that as we were on campus, and she narrowed her eyes and said, "No!" I was broken. I waited all these years to back and look at Mills to see if maybe now I would see it and think, "Oh, I'm so glad I didn't go there. It's not what I remembered." Well, sadly, it was exactly as I remembered and I was broken again.

Posted by Cameron Column at 10:26 PM No comments:

THANK YOU AMERICAN CINEMATHEQUE FOR AN AMAZING L.A. BOOK SIGNING 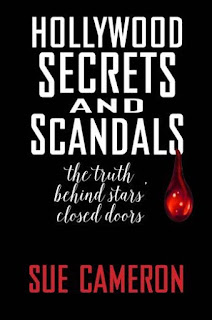 THANK YOU GWEN AND MARGOT OF AMERICAN CINEMATHEQUE FOR INVITING ME TO HAVE TWO OF MY FAVORITE MOVIES SCREENED AT THE EGYPTIAN and having me introduce them both and sell my books.

I chose VALLEY OF THE DOLLS because of my love of its campy perfection, plus my admiration for Jackie Susann, and how significant my meeting was with Sharon Tate and how it led to the Manson chapter. I also chose Debbie Reynolds' WHAT'S THE MATTER WITH HELEN? It is rarely seen, and I was on the set constantly.

Thank you to my friends from LA and Palm Springs. We all went to dinner at Musso's in Hollywood after. Wow! Great night!

Posted by Cameron Column at 9:22 PM No comments: