MIKIMOTO AND KEVAN HALL IN MALIBU 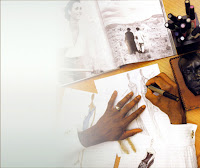 Go to the hot new Malibu Lumber Yard between June 18-21 some time between Noon and 6. Kevan Hall and Mikimoto have teamed up their collections. If you want to meet Kevan in person, go on the 20th or 21st between 2-5 p.m.
Posted by Cameron Column at 5:10 PM 1 comment: 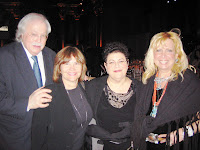 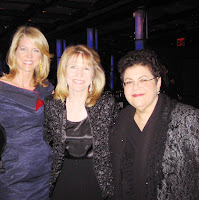 Had two fabulous trips. Stayed in Joan Rivers' apartment (the week of the "Celebrity Apprentice" finals!) She's the best hostess ever. Saw "God of Carnage" with Joely Fisher, and was totally knocked out. Not since the original Uta Hagen performance of "Virginia Woolf" have I been this excited. RUN to see it. Ate everywhere like Arturo's Pizza, Grey's Papaya, Katz' Deli, and Patsy's. I don't care about Per Se or Le Cirque any more. I want NY FOOD. Went with legendary singer Phoebe Snow who was honored by the Martha Graham Dance Company. (See photo with Paula Zahn and her friend Sue Shalom.) Then went to Barry Scheck and Peter Neufeld's prestigious Innocence Project Awards where Phoebe sang. (See photo with the amazing crime couple Dr. Michael Baden, who is performing David Carradine's autopsy as you read this, and his wife, lawyer Linda Kenney Baden--the one who got the hung jury for Phil Spector who is now representing alleged murderer Casey Anthony.) The Innocence Project uses DNA to have innocent convicted people released from prison.
Posted by Cameron Column at 4:11 PM No comments: 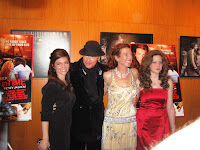 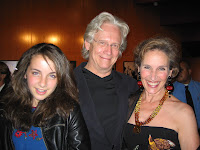 One of my favorite people and directors is Henry Jaglom. I love his style, his sensitivity, his creativity, and his life force. I love Henry himself. He always seens to be present at important times in my life, and I associate him with my fathers. My mother has been married four times. Two out of the four I really loved. One was Bio-Dad; the other was Step-Dad 1. Henry held me as I cried over losing Step-Dad 1 when we were huddled in the back of the Gardenia. When he screened "Irene in Time" it was on the day that would have been Bio-Dad's 100th birthday, and I had spent some time at the cemetery. And wouldn't you know it--"Irene in Time" has to do with fathers.

I think Henry makes movies for intelligent, thoughtful adults. Long may he reign! His new movie, "Irene in Time," stars Tanna Frederick, Victoria Tennant, and Andrea Marcovicci. (What an actress Andrea is. We're so used to hearing her sing.) It is about little girls and their fathers, and how even as adults our perception of who or what a father was to us can either enhance or wreck our lives. Henry's more recent movies have "opened up" more in locations, rather than just being women sitting around a table talking. But there is plenty of that in this movie (which I love), as well as lots of men at their gambling activities acting as contrasts to the women. Throughout the movie are performances of Harriet Schock's music by Tanna Frederick and Harriet, as well as a song performed by Andrea and written by Henry and Tanna. This movie held me all the way, and I LOVED LOVED the score.
Tanna Frederick, who garnered rave reviews for her last film, is a very fearless actress who isn't afraid to annoy you with her character, or pull you in until your heart breaks. She's unforgettable. Henry's two children, Sabrina and Simon do cameo appearances. Simon is very funny, and Sabrina just could be a great big movie star if guided correctly.
Posted by Cameron Column at 4:00 PM No comments: 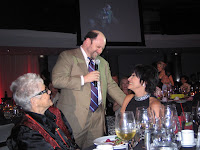 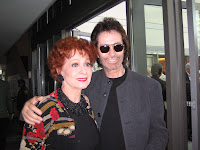 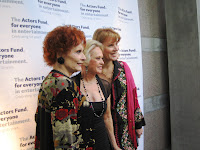 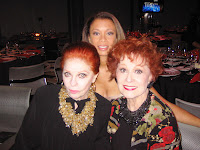 I went to the Actors' Fun Tony Awards party to see the east coast feed. I sat with Carol Lawrence, Chita Rivera, and George Chakiris. Later on we went to Joe Tremaine's house (the amazing choreographer) and DeDe Wood (another genius choreographer) was there. So was former Tony-nominee for "Fosse" Valarie Pettiford, and Chita's daughter Lisa Mordente. It was quite bizarre sitting with the REAL "West Side Story" people, while the new, really dreadful (my opinion and I won't share the others' comments on the revival) "West Side Story" was being presented at this year's Tony's. It's at moments like this that I am so grateful to be sitting with theatrical legends. You'll see photos of Jason Alexander singing to Chita, with DeDe Wood on the left, Valarie, Carol and Carol, Carol Tippi Hedren and Mariette Hartley. And Lucie Arnaz was the most beautiful person on the Tonys! P.S. Alice Ripley, who won for "Next to Normal," clearly is NOT.
Posted by Cameron Column at 3:49 PM 1 comment: