HAPPY THANKSGIVING TO ALL ON THIS WONDERFUL DAY OF GRATITUDE

I am thankful for good health

I am thankful that I have tried to make it a better world and have done my part.

I am thankful for the greatest friends you could ever imagine. They are my life.

I am thankful for the love of animals

I am thankful that I feel God everywhere 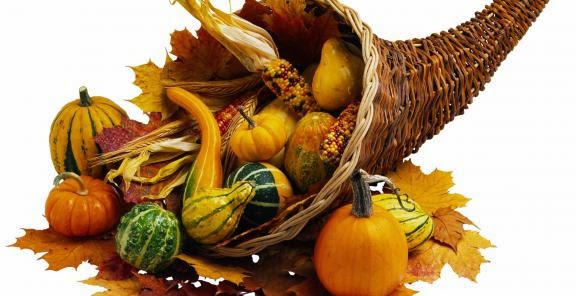 Posted by Cameron Column at 10:59 AM No comments:


I HAD NEVER BEEN TO MEMPHIS BEFORE. I KNEW ABOUT GRACELAND, BEALE STREET, MARTIN LUTHER KING'S MURDER, AND ST. JUDE.

WELL, MARTIN LUTHER KING WON OUT OVER GRACELAND IN MY LIMITED TIME THERE.

I had only two hours in between events. It was already pitch black out. I asked the cabbie to take me to the Lorraine Motel. It is out of the main part of town, and when he dropped me off, I was the only person around standing in the "Midnight" air, surrounded by mist. It was eery, and like I was the only person in the world and on another planet. All I could see from the corner was the illuminated sign.
When I went around the back I saw where the actual shooting took place. Nothing had been changed.
Again, I was the only person there. It was so scary and sad at the same time. I couldn't linger because my mind was forming pictures of the past. 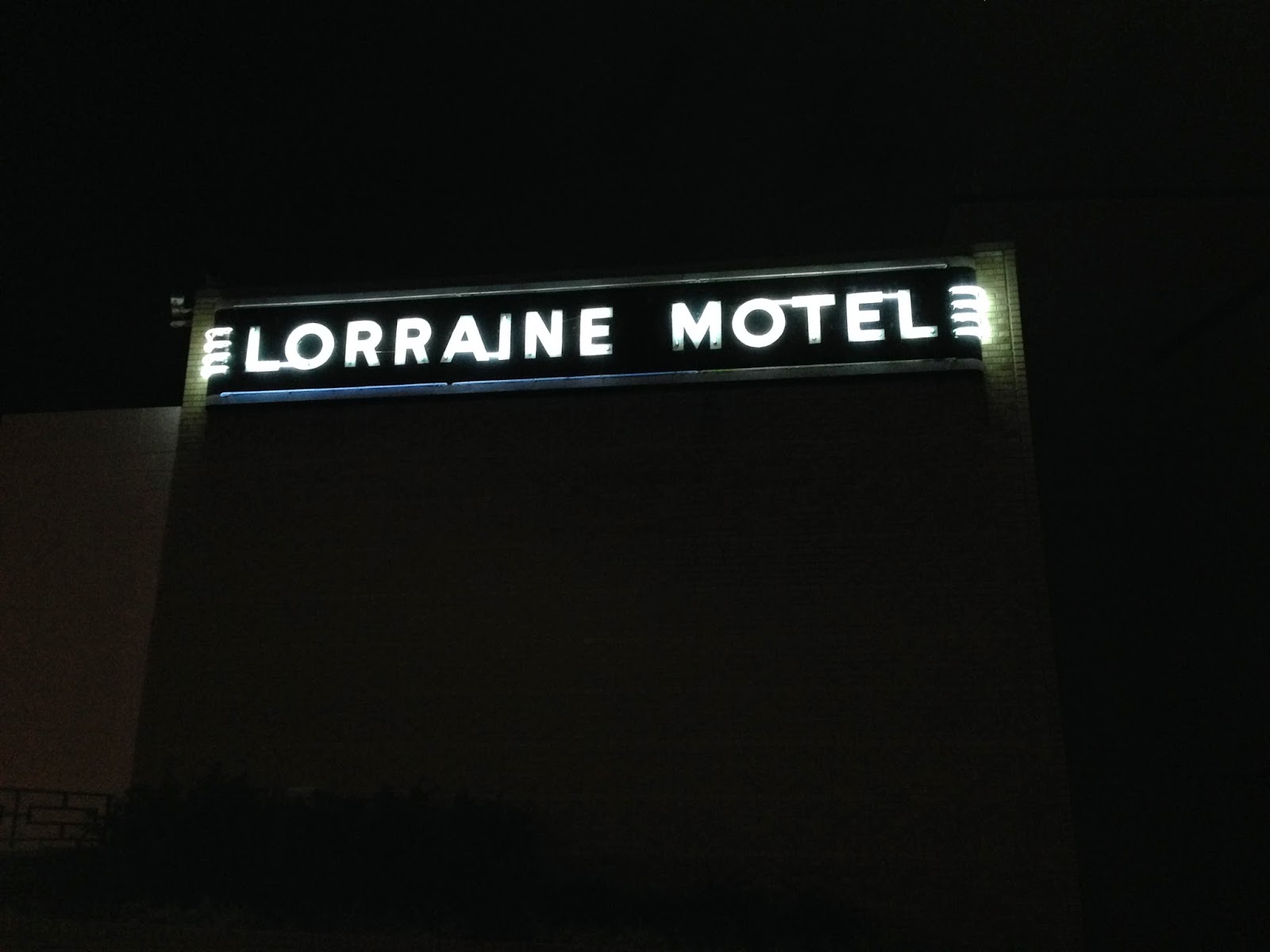 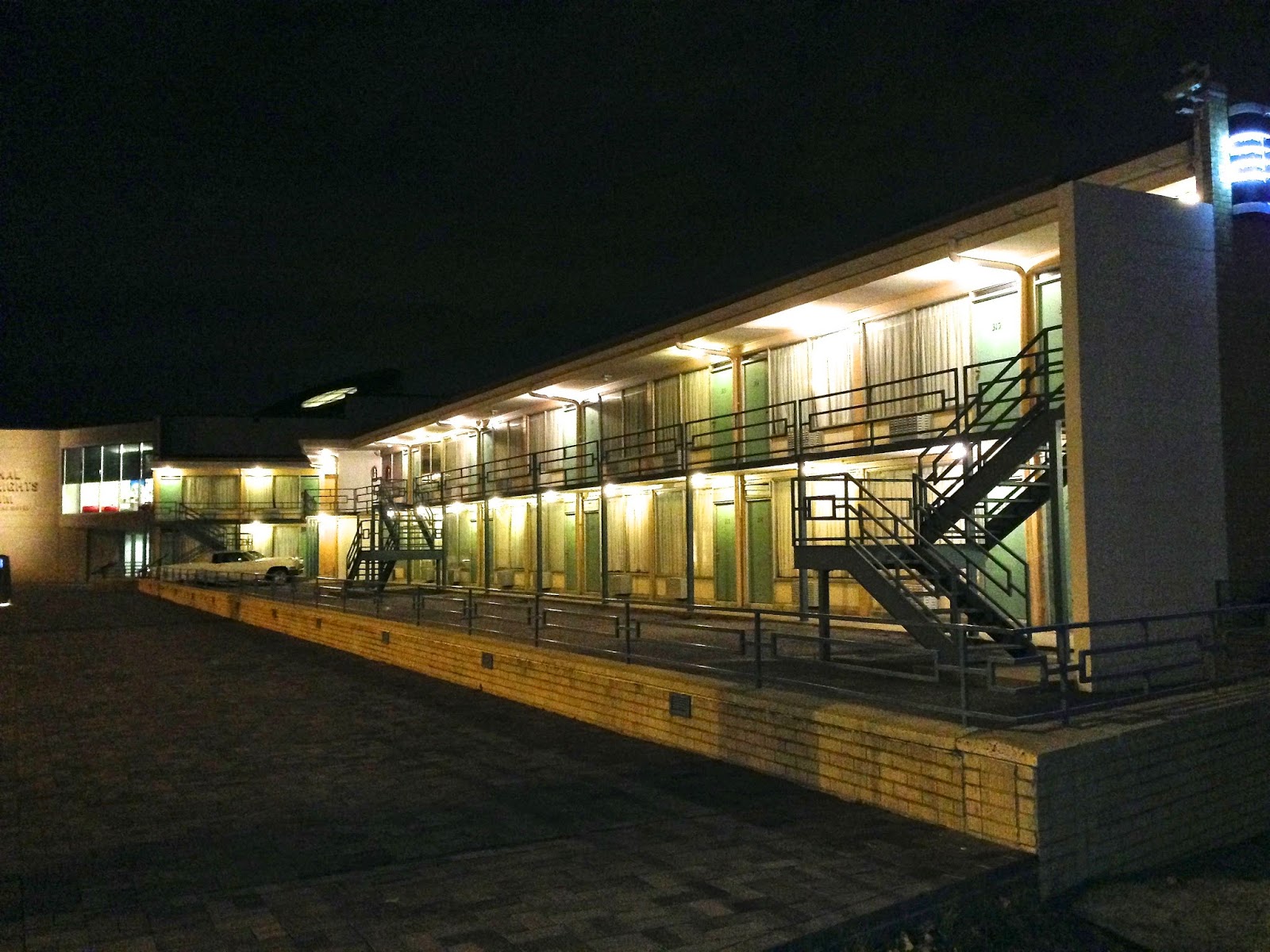 Fortunately, a block away is Central BBQ, the best BBQ in Memphis because it's filled with locals, not tourists. There I sat, still alone, but enveloped in the juke box, ribs, etc....again back in time. 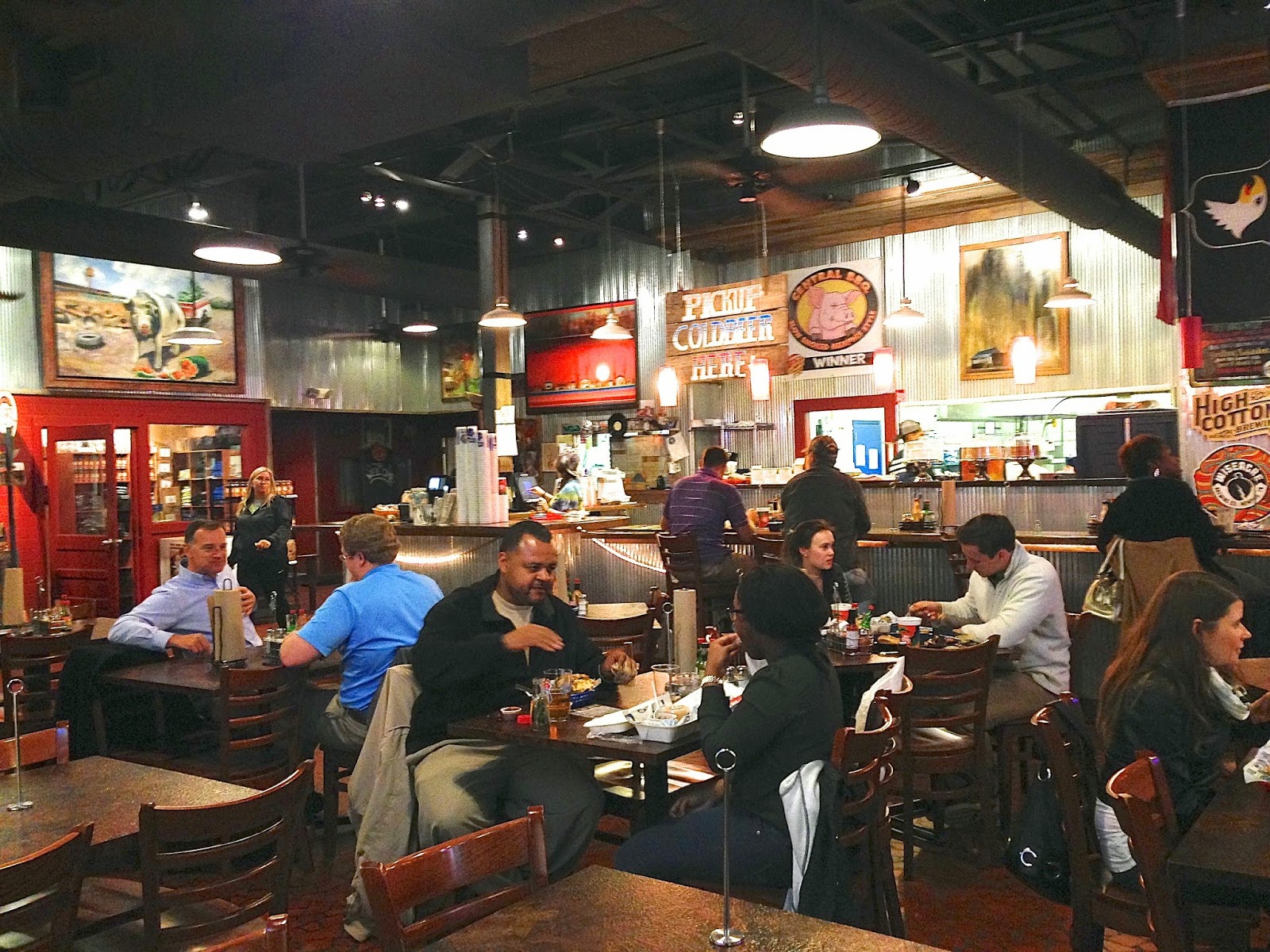 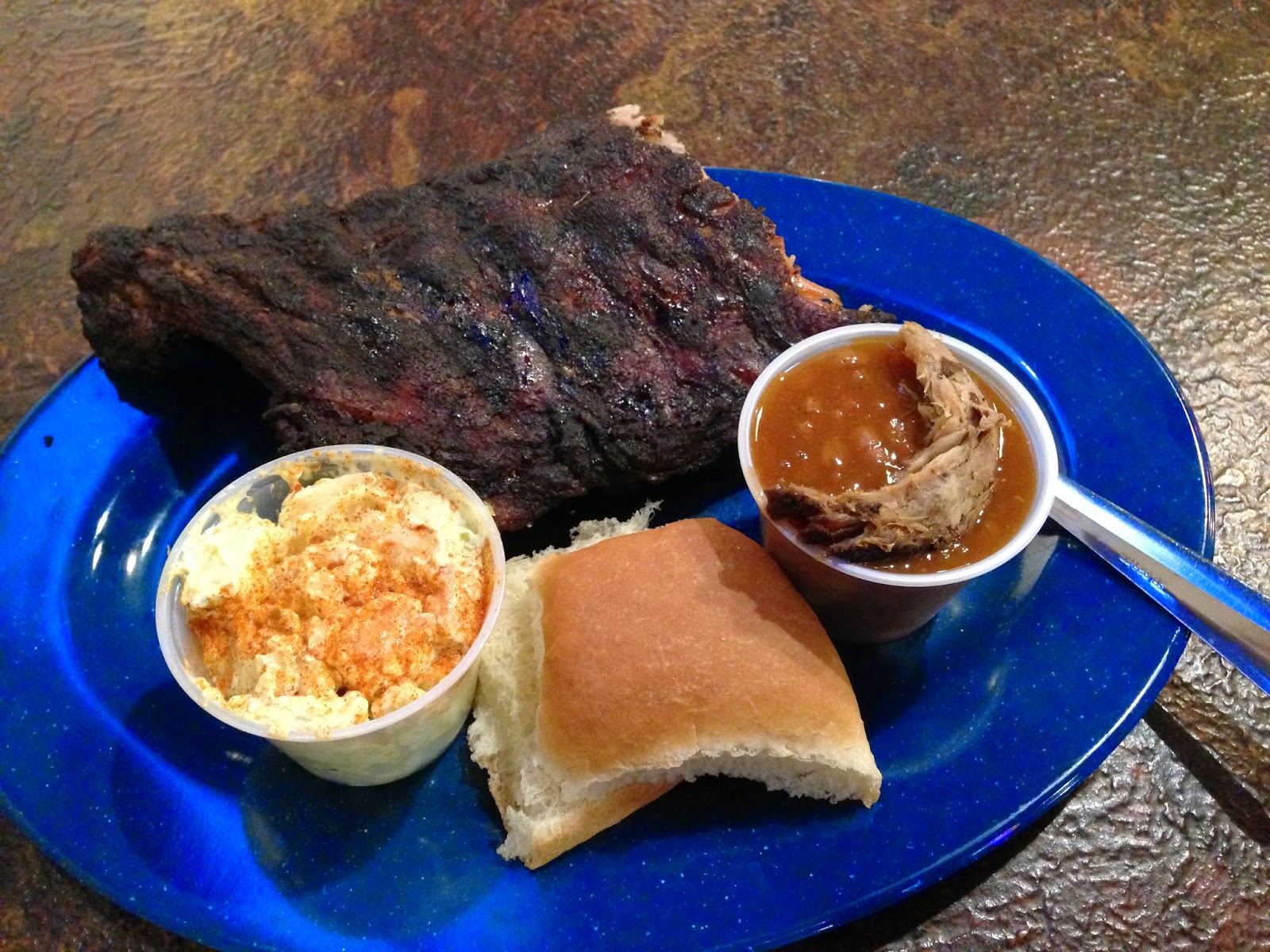 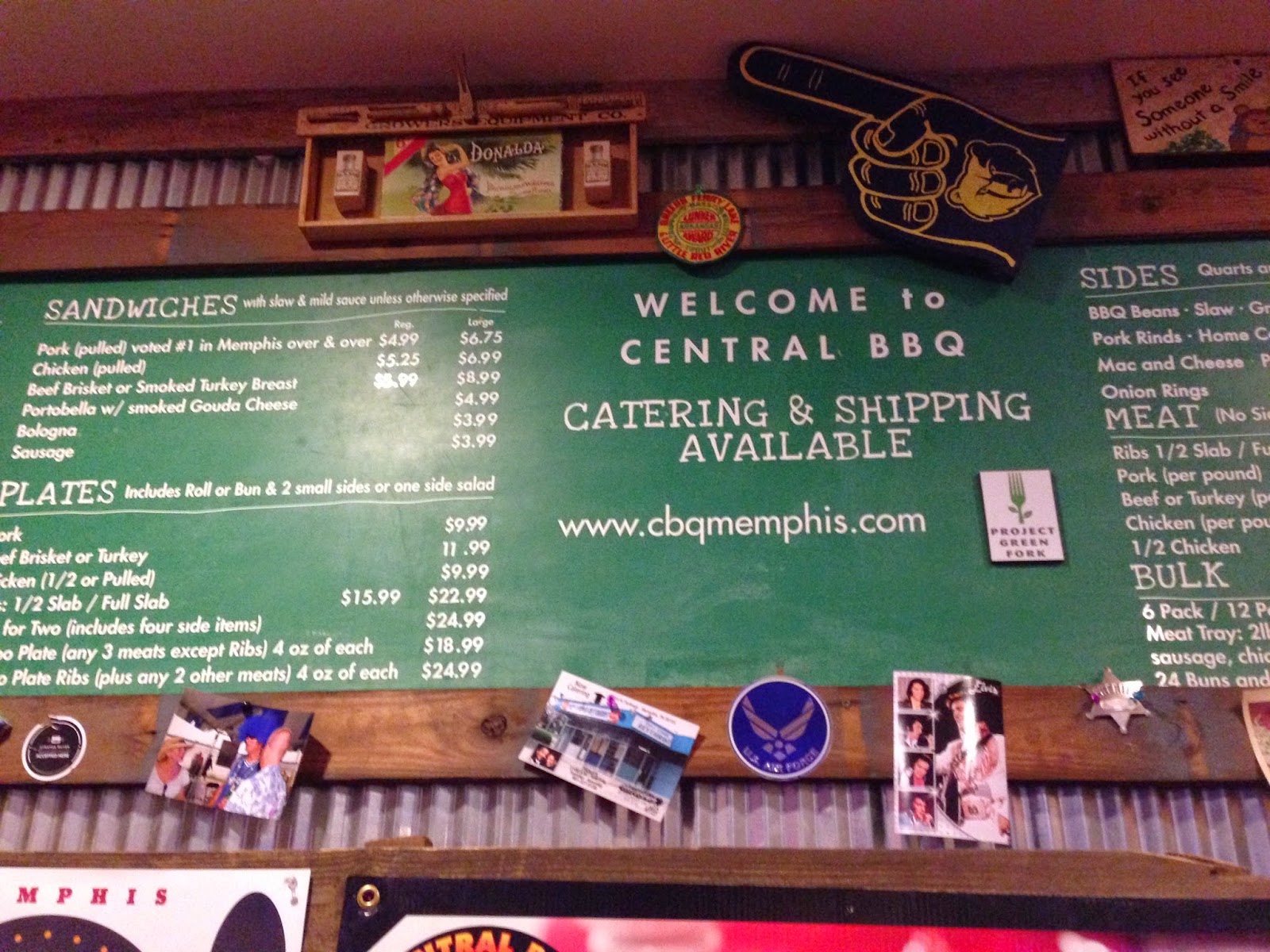 The No. 1 hotel in Memphis is the Peabody, famous for its ducks that parade around the lobby fountain twice a day. I knew I'd already missed the parade, but I wanted to see the hotel because I am a hotel freak for traditional, legendary hotels. I was not disappointed. Back in time once more. 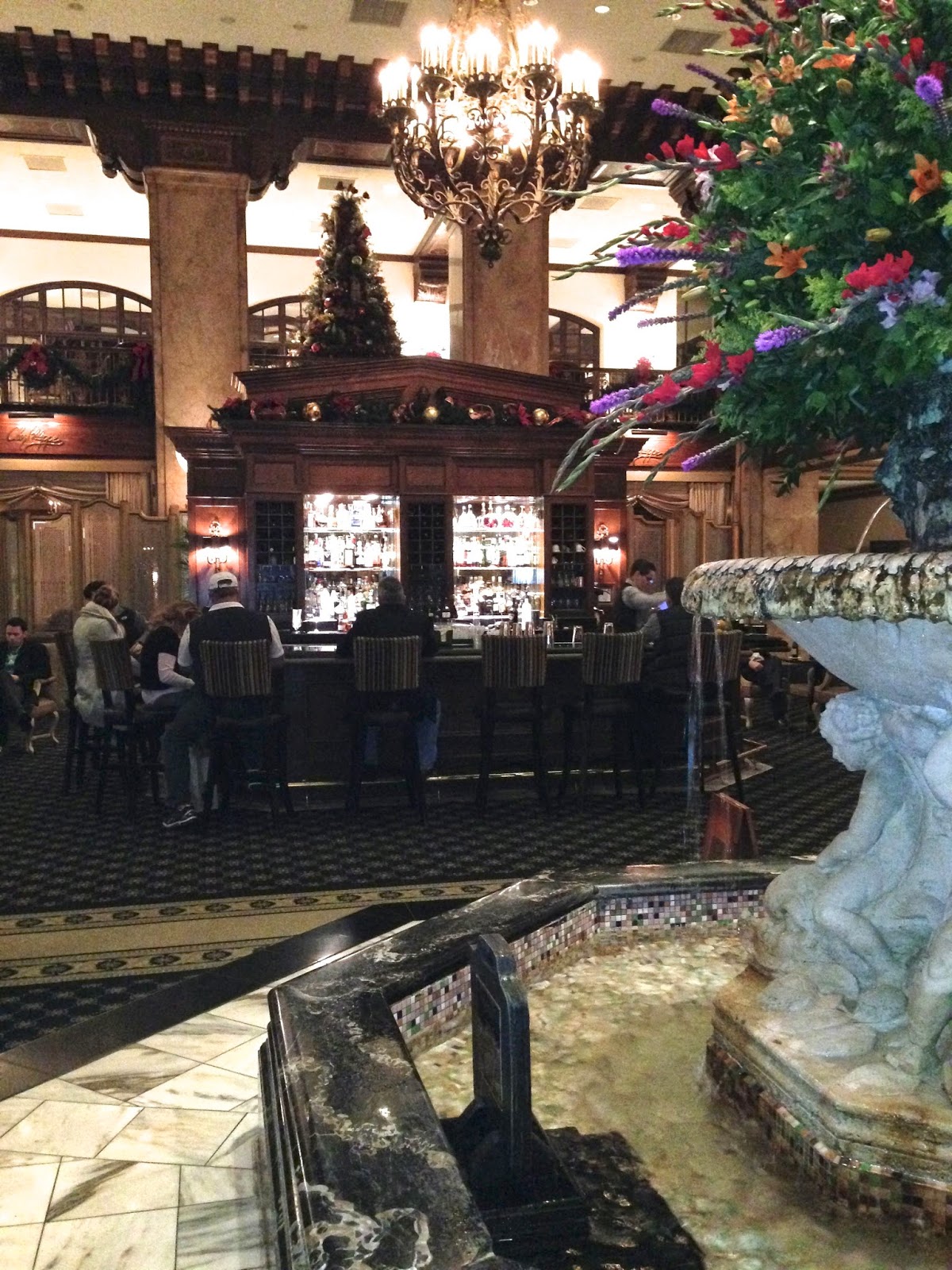 Posted by Cameron Column at 11:34 AM No comments:

IT WAS A REMARKABLE WEEKEND. ST. JUDE UNVEILED A BUILDING CALLED THE MARLO THOMAS CENTER, AND HILLARY WAS THERE TO HELP HER CUT THE RIBBON. 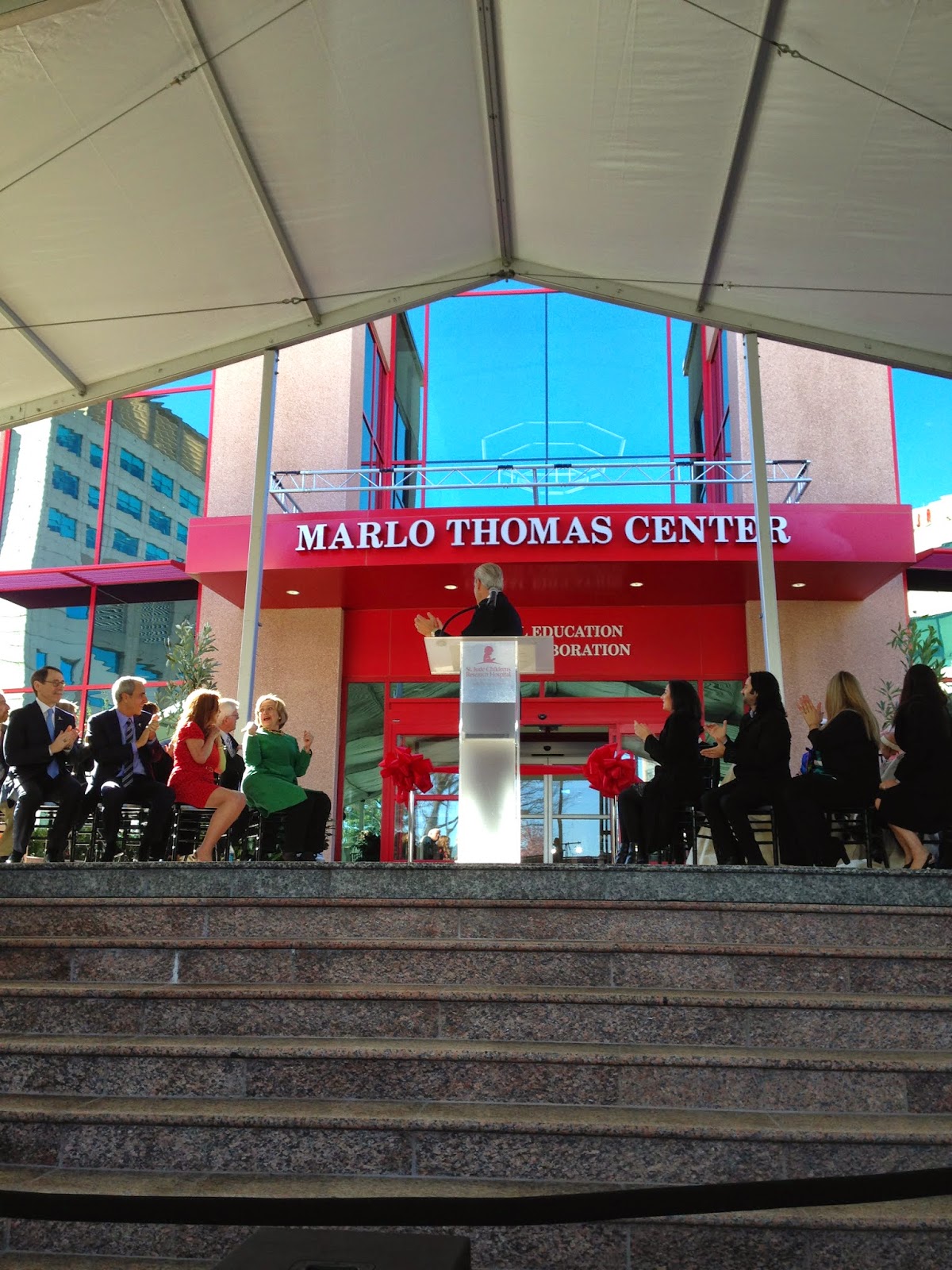 It may have been 40 degrees in Memphis, but family and best friends all showed up for this great honor for Marlo. Ever since her father, Danny Thomas, died, Marlo has stepped in as the public face of St. Jude and has raised hundreds of millions of dollars. And, Tony and Terre are right there with her working constantly. To me, St. Jude is the most important charity in the world. "No child should die in the dawn of life," said Danny Thomas when he founded it. What makes St. Jude so incredible is that the sick child and his or her family pay absolutely nothing for the treament. And they get airfares as needed and housing and meals in dorms for them on the campus of St. Jude.

St. Jude is a research hospital and it has all but eradicated certain kinds of childhood cancers, and their cure rates rise each year. The recently purchased a $200 million radiation probe machine designed for children with a pin-point beam to hit the tumors. Every where you go in St. Jude there are extraordiary doctors explaining everything to you, and, most importantly, St. Jude shares all its information wtih any doctoror hospital needing help. They don't try to get patents and make its information hard to get.

Tony Thomas, in his introduction, started all of us crying when he mentioned how much he hoped his father was there seeing all of this. Hillary and Marlo joined in the crying, as did all of us. Hillary, in her speech, talked about the Thomas Family, their caring and dedication, and the wonderful healthcare model they've created. Marlo spoke so eloquently about her love for St. Jude and the children. "I have held a dying child in my arms. I know what these brave families go through. It is such an honor that I can do this work to help." 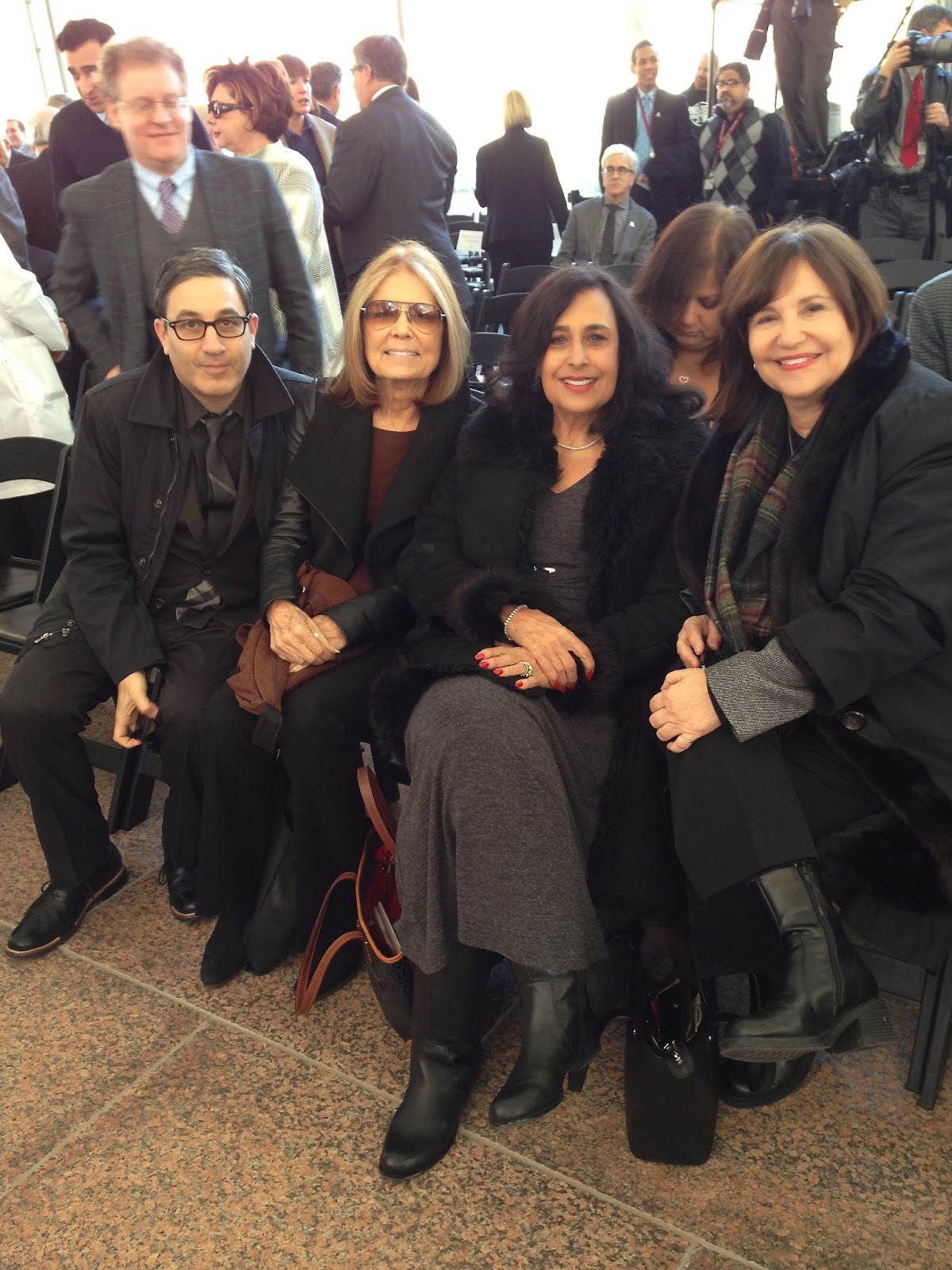 
After the ceremony we went into the building for lunch. 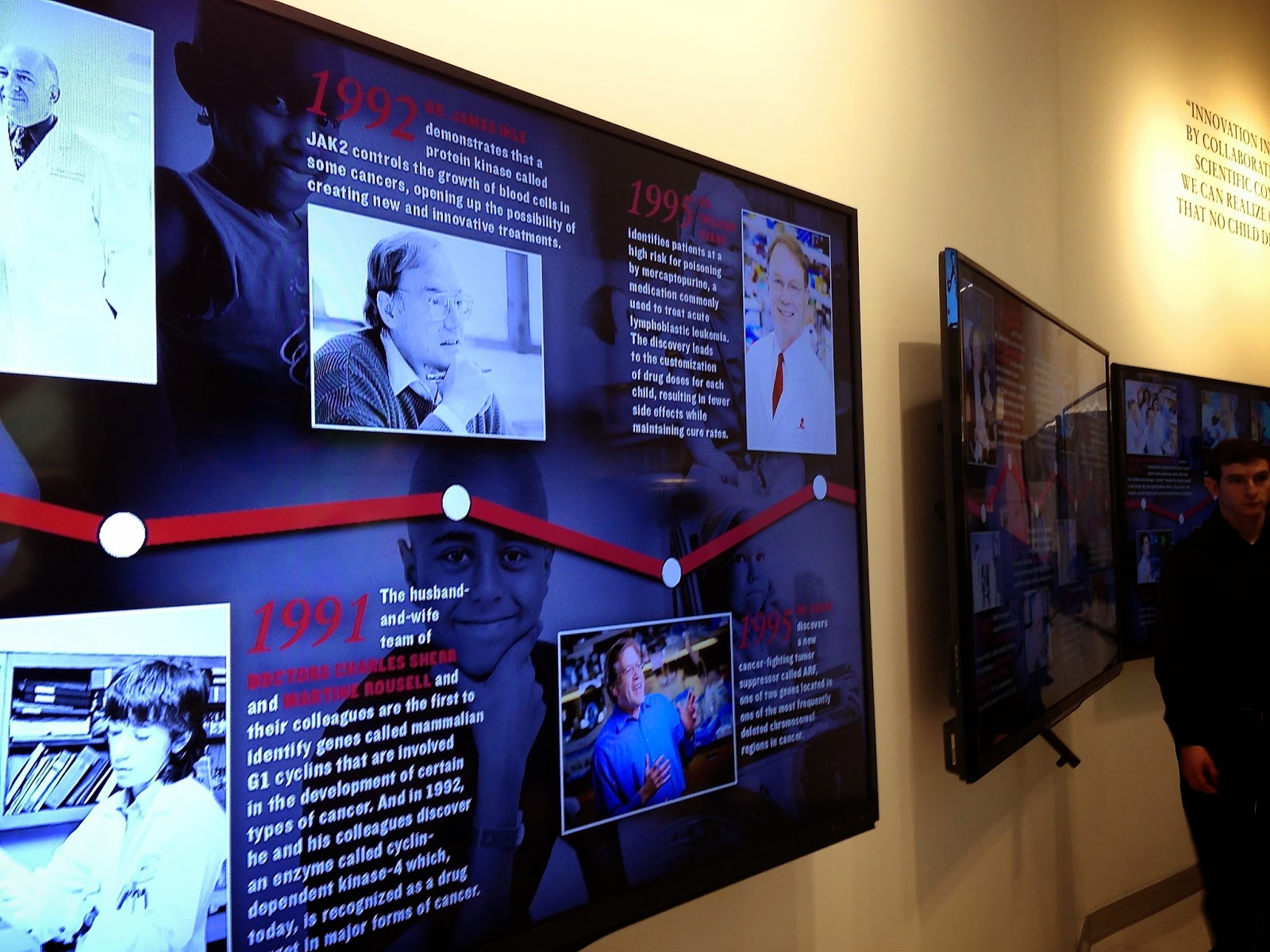 An incredible digital time wall goes along the length of the Center's main hall telling Marlo's story and St. Jude's

Lest we not forget, the first building at St. Jude is the Danny Thomas Building.

Below is a shot of the main hall where flags of all the countries St. Jude helps are hanging 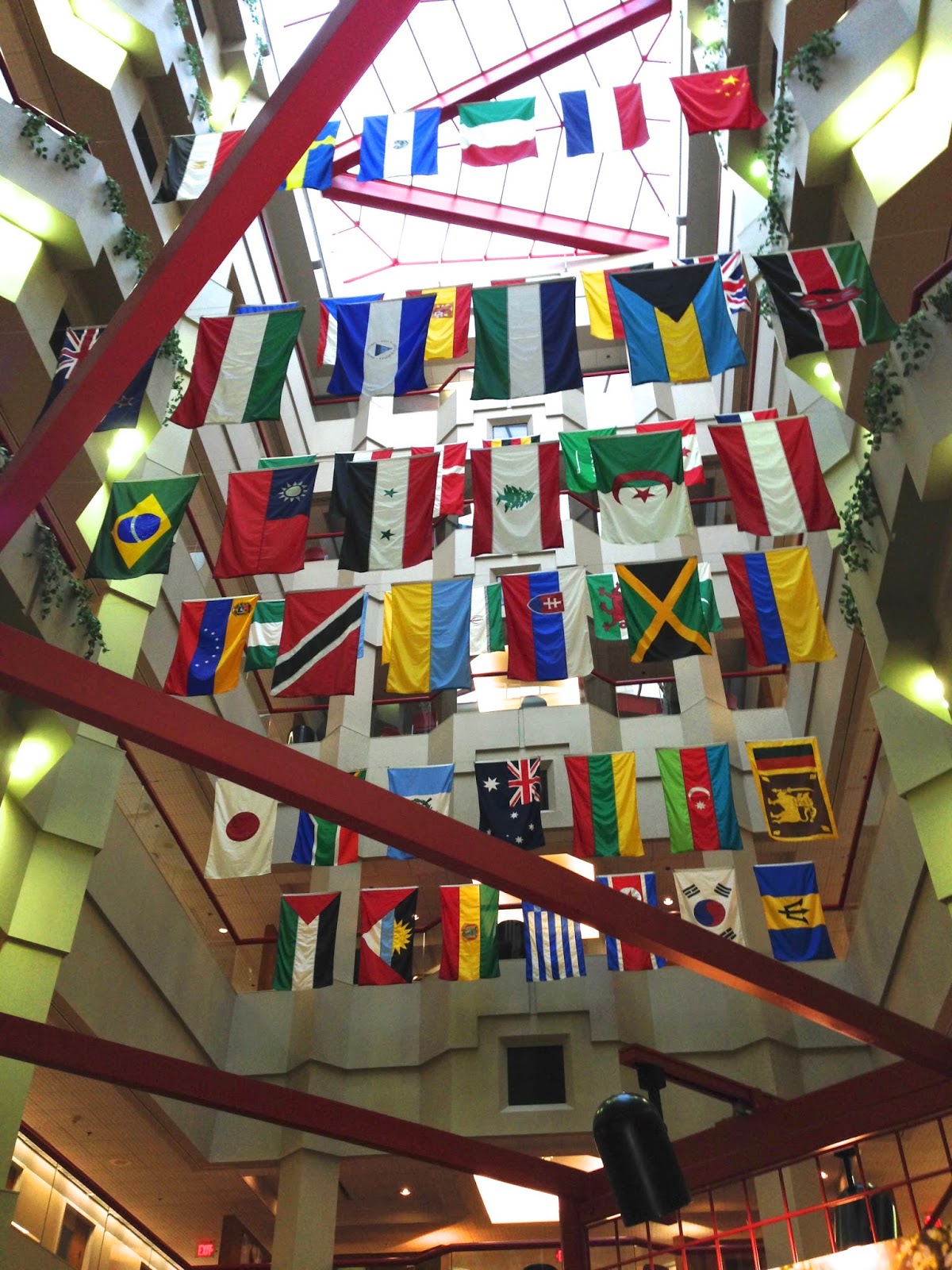 Also inside that building :


THE NIGHT BEFORE THE UNVEILING, MARLO GAVE A PARTY AT FLIGHT RESTAURANT for friends and family. Flight is in an old, restored building, and they have a really cool brick basement where the party was. We all know wine flights, of course, but the restaurant has flights for each course--three starters, three entrees and three desserts perperson! 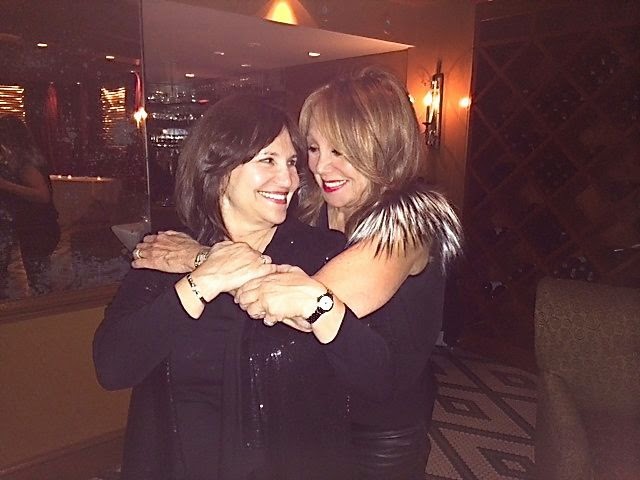 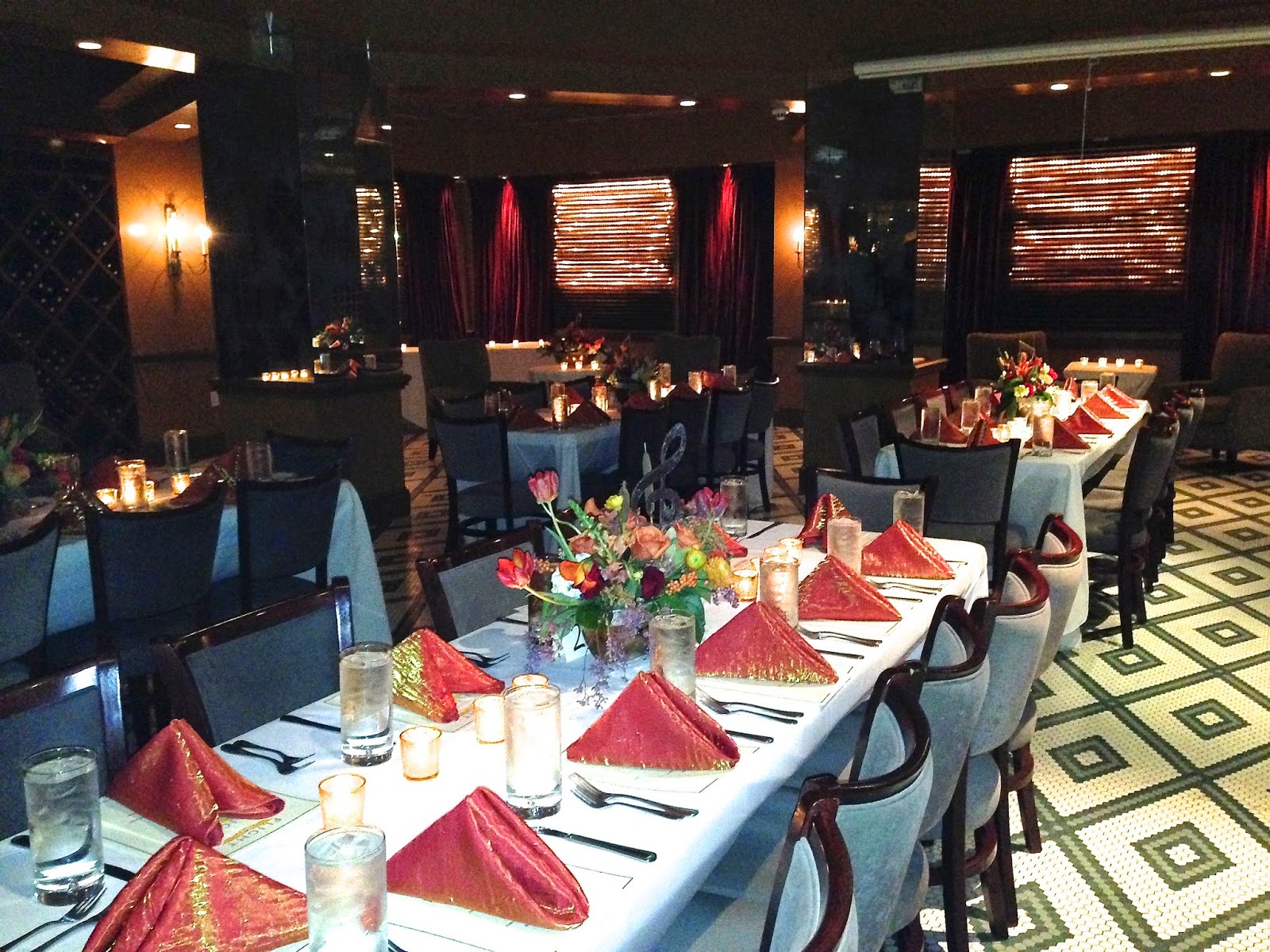 Posted by Cameron Column at 5:13 PM No comments:

ANOTHER REASON TO BE PRO DEATH PENALTY

CHARLES MANSON IS GETTING MARRIED!!! HOW LOVELY..... 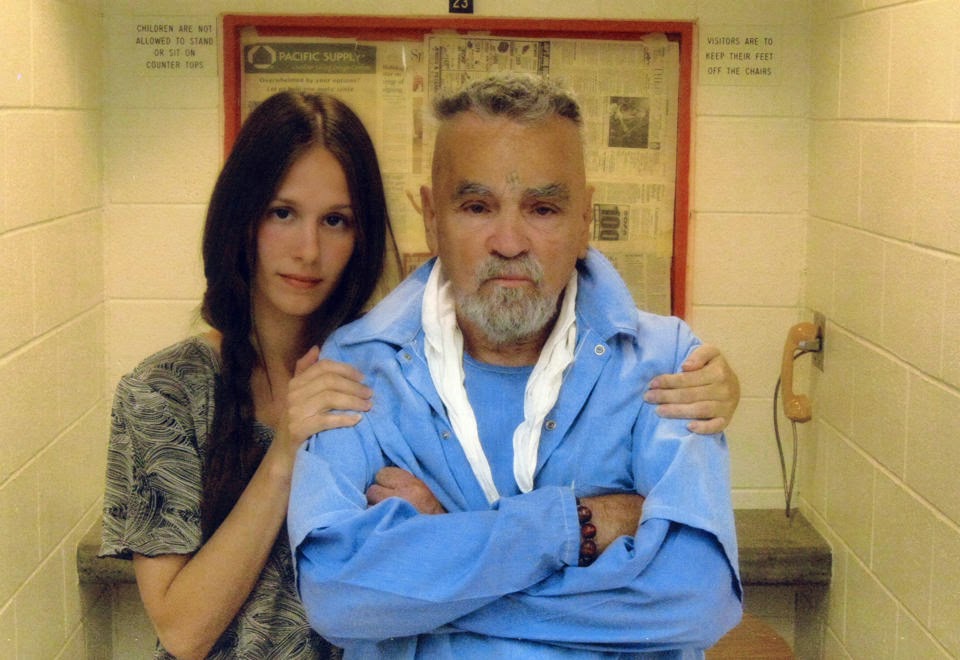 HE'S MARRYING SOME IDIOT IN HER 20S NAMED AFTON.
Posted by Cameron Column at 8:48 PM No comments:

"INTERSTELLAR" IS A REAL WASTE OF TIME 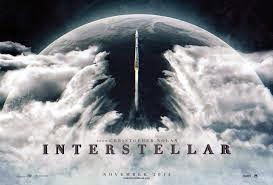 "Interstellar" is boring, confusing, and a complete waste of time. The acting is fine. Some of the "pictures" are pretty. There are occasional tense moments of mechanical function or malfunction. Loved Mackenzie Foy who plays the young girl. Big star potential.
It is over three hours long. Spare yourself.
Posted by Cameron Column at 8:42 PM No comments: 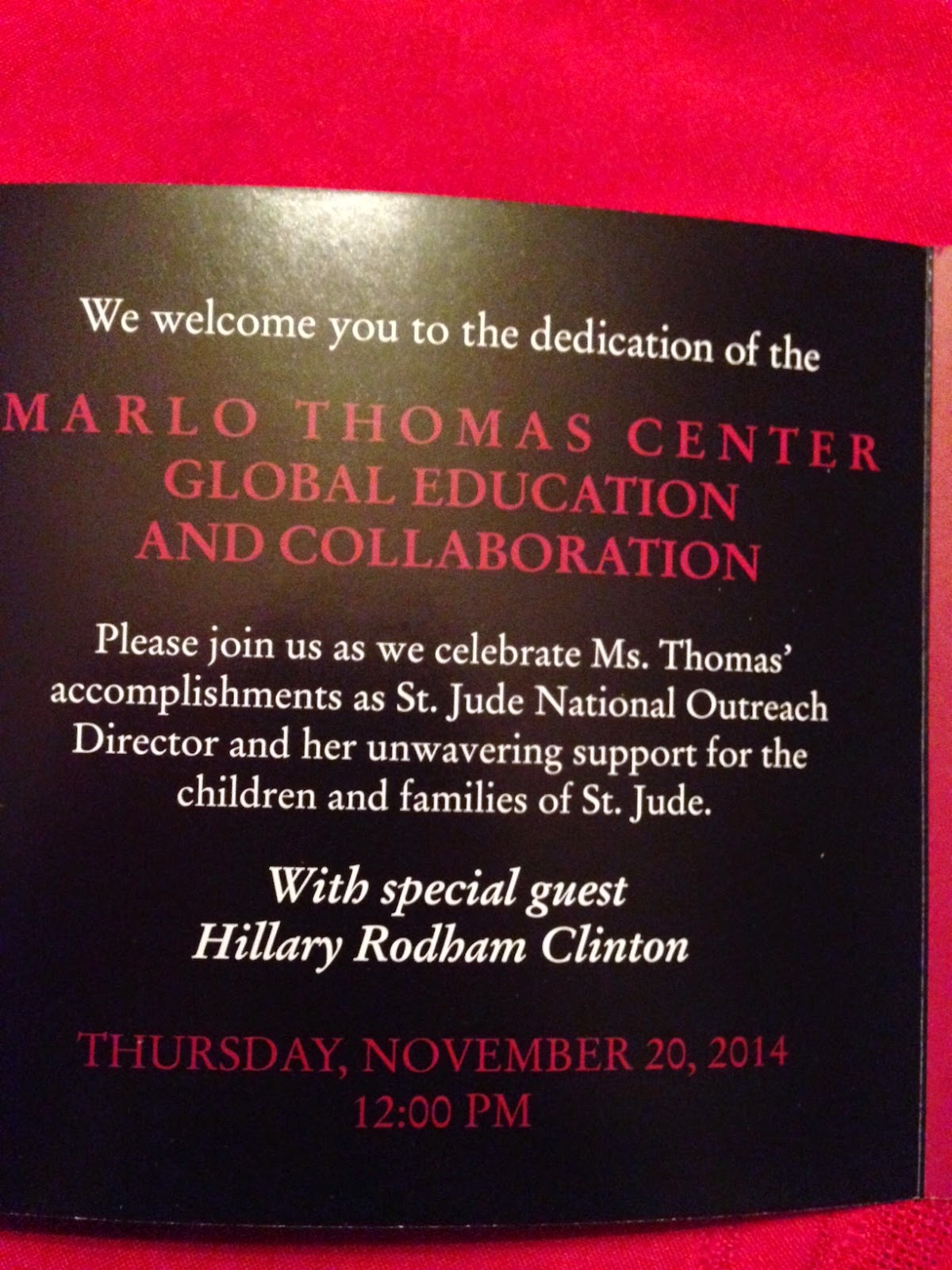 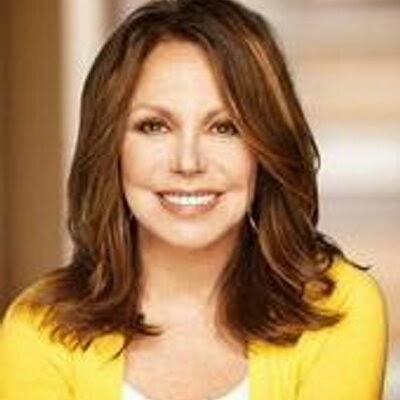 Big dinner for friends flying in to be held Wednesday evening in Memphis. Tour of St. Jude Thursday morning. Building dedication at Noon Thursday with Marlo and Hillary followed by lunch in the new Marlo Thomas Center.

Happy Birthday, Marlo.Now THIS is a present!!!! 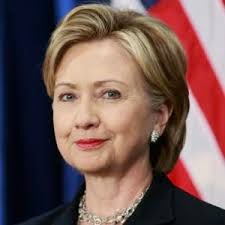 Posted by Cameron Column at 7:11 PM No comments:

OH MY GOD!!! MARLO THOMAS IS BEING AWARDED THE PRESIDENTIAL AWARD OF FREEDOM 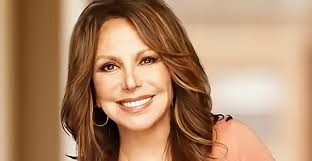 I am as excited or maybe even more excited than when she won her first acting Emmy.


WASHINGTON, Nov. 10 (UPI) -- Meryl Streep, Marlo Thomas and Stevie Wonder will be among the 19 recipients honored with the Presidential Medal of Freedom at a White House ceremony Nov. 24.


"I look forward to presenting these 19 bold, inspiring Americans with our nation's highest civilian honor," U.S. President Barack Obama said in a statement Monday. "From activists who fought for change to artists who explored the furthest reaches of our imagination; from scientists who kept America on the cutting edge to public servants who help write new chapters in our American story, these citizens have made extraordinary contributions to our country and the world."
Also set to be recognized at the ceremony are the late choreographer/dancer Alvin Ailey; author Isabel Allende; broadcast journalist Tom Brokaw; the late civil-rights activists James Chaney, Andrew Goodman, and Michael Schwerner; scientist Mildred Dresselhaus; Congressman John Dingell; activist Ethel Kennedy; writer Suzan Harjo; Abner Mikva, who has served in all three branches of government; Congresswoman Patsy Takemoto Mink; the late Congressman Edward Roybal; professional golfer Charles Sifford; economist Robert Solow; and composer Stephen Sondheim.

Posted by Cameron Column at 8:40 PM No comments:


Loreen Arbus has been a friend of mine for decades, and I have always admired her values and style. When I worked at ABC-TV, Loreeen also was an executive there, and at that time, hardly any women were in executive positions--in fact, there were only two others. LOREEN WAS THE ONLY ONE WHO WOULD HAVE LUNCH WITH ME. The other women were so competitive that they ignored us completely. I've never forgotten her kindness.

Occasionally, Loreen and Nancy Hutson Pearlman give luncheons for interesting women. They have done it for over 25 years. This week, Loreen opened up her new Los Angeles home for us to see. She also has a place in New York. I couldn't stop photographing her art and decor, but I want to say right now, that ARCHITECTURAL DIGEST OR ELLE DECOR or any number of magazines should be shooting it. 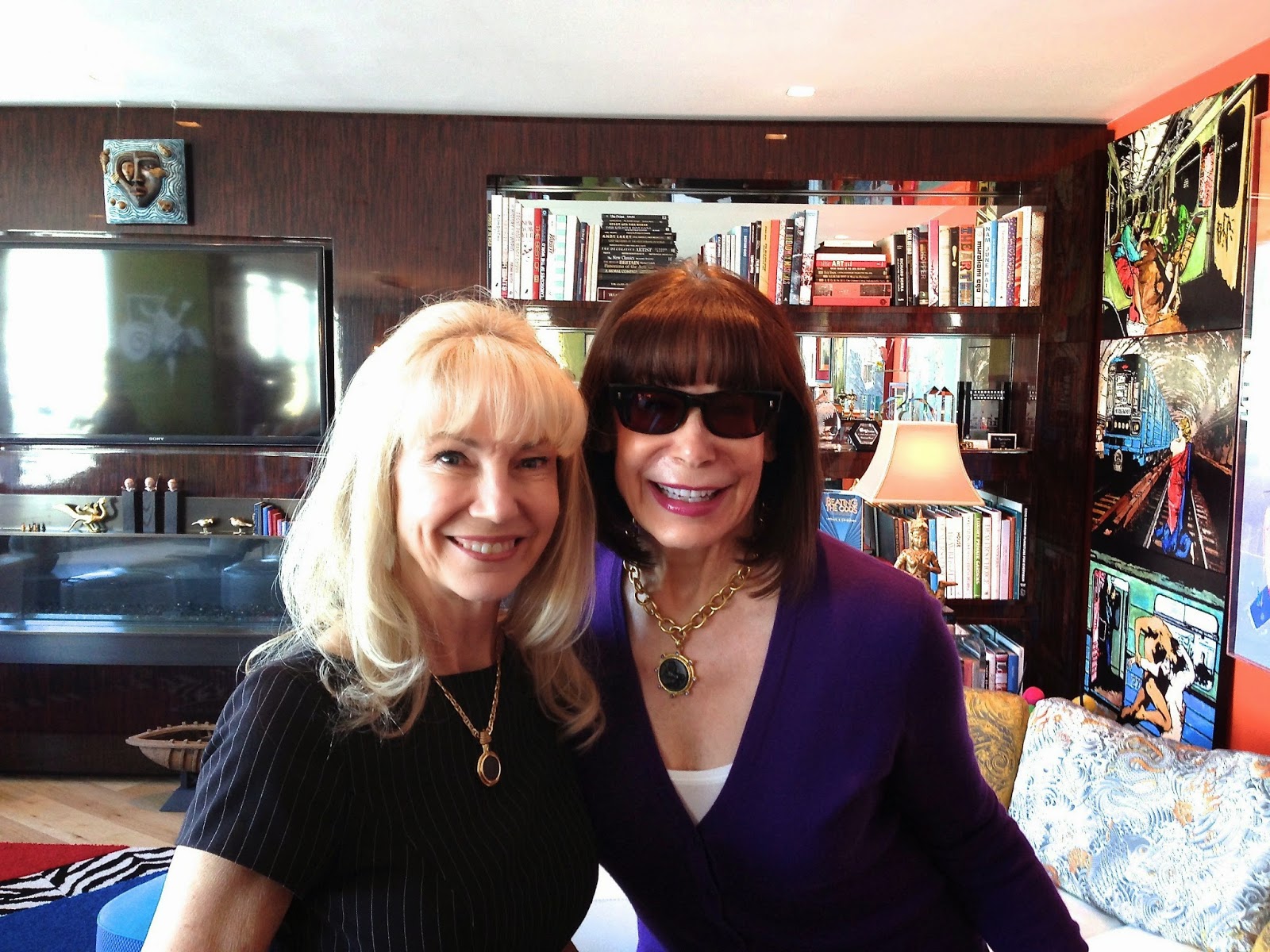 
AND NOW, JUST FEAST YOUR EYES ALL OVER THE PENTHOUSE..... 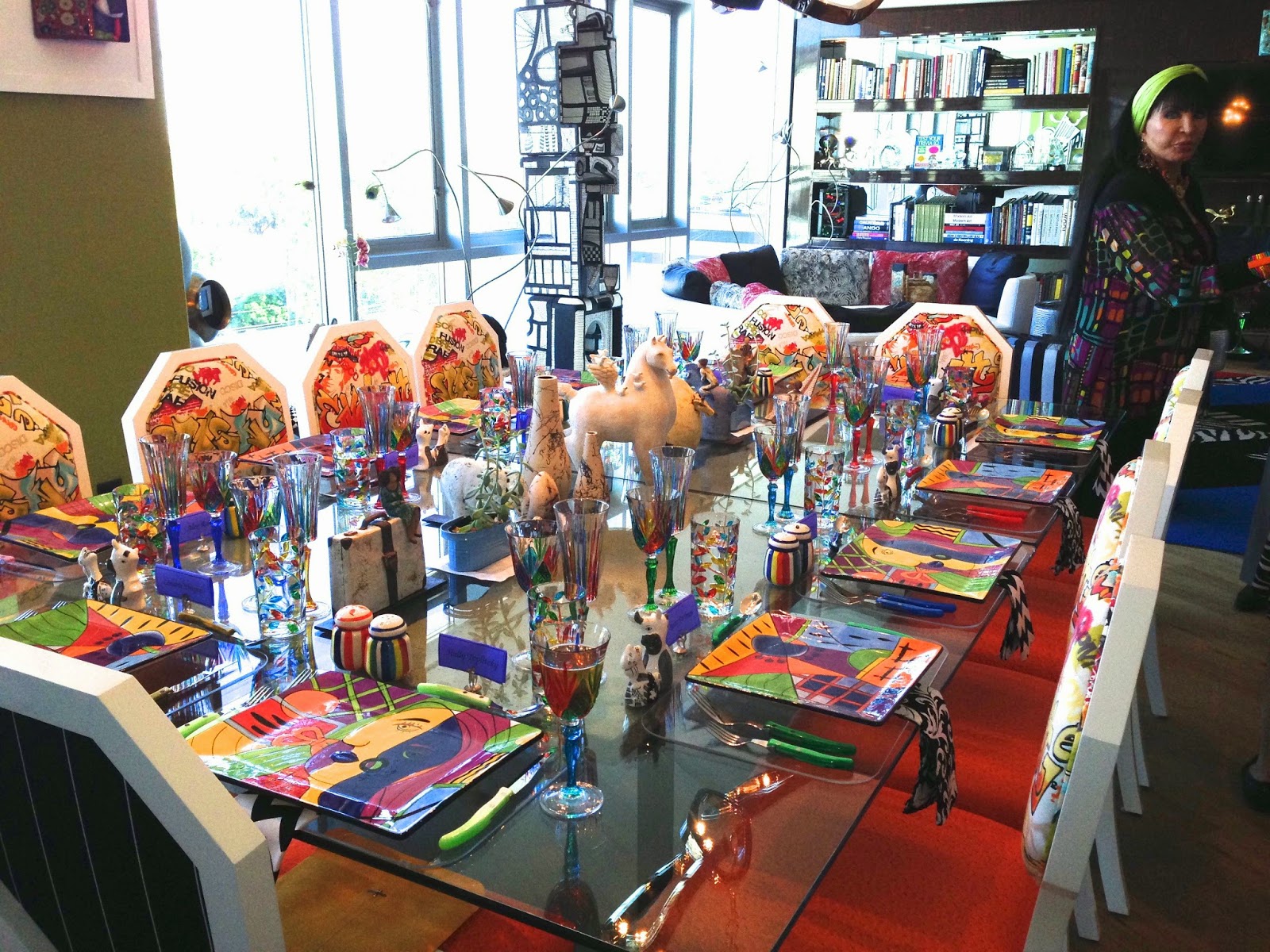 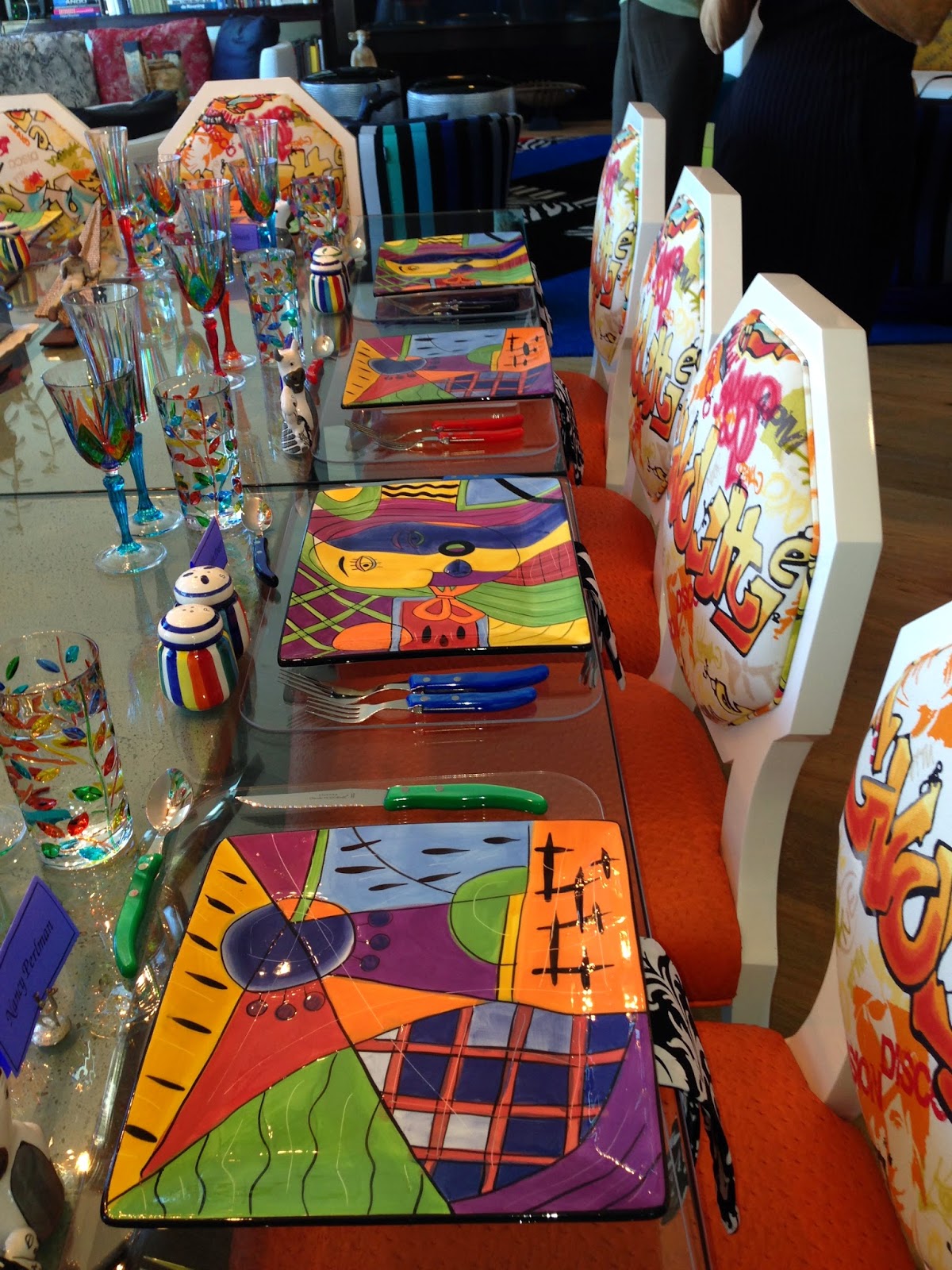 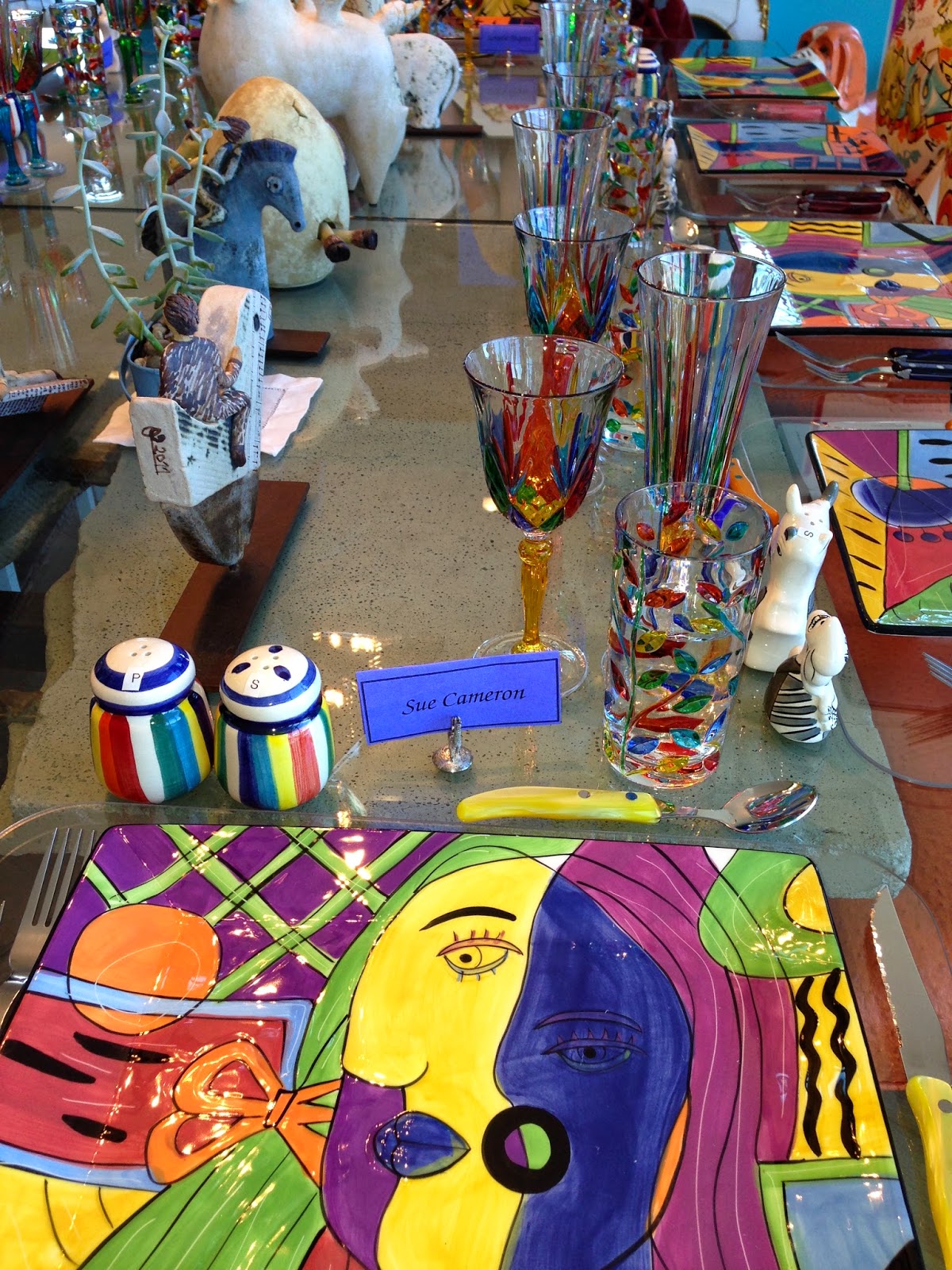 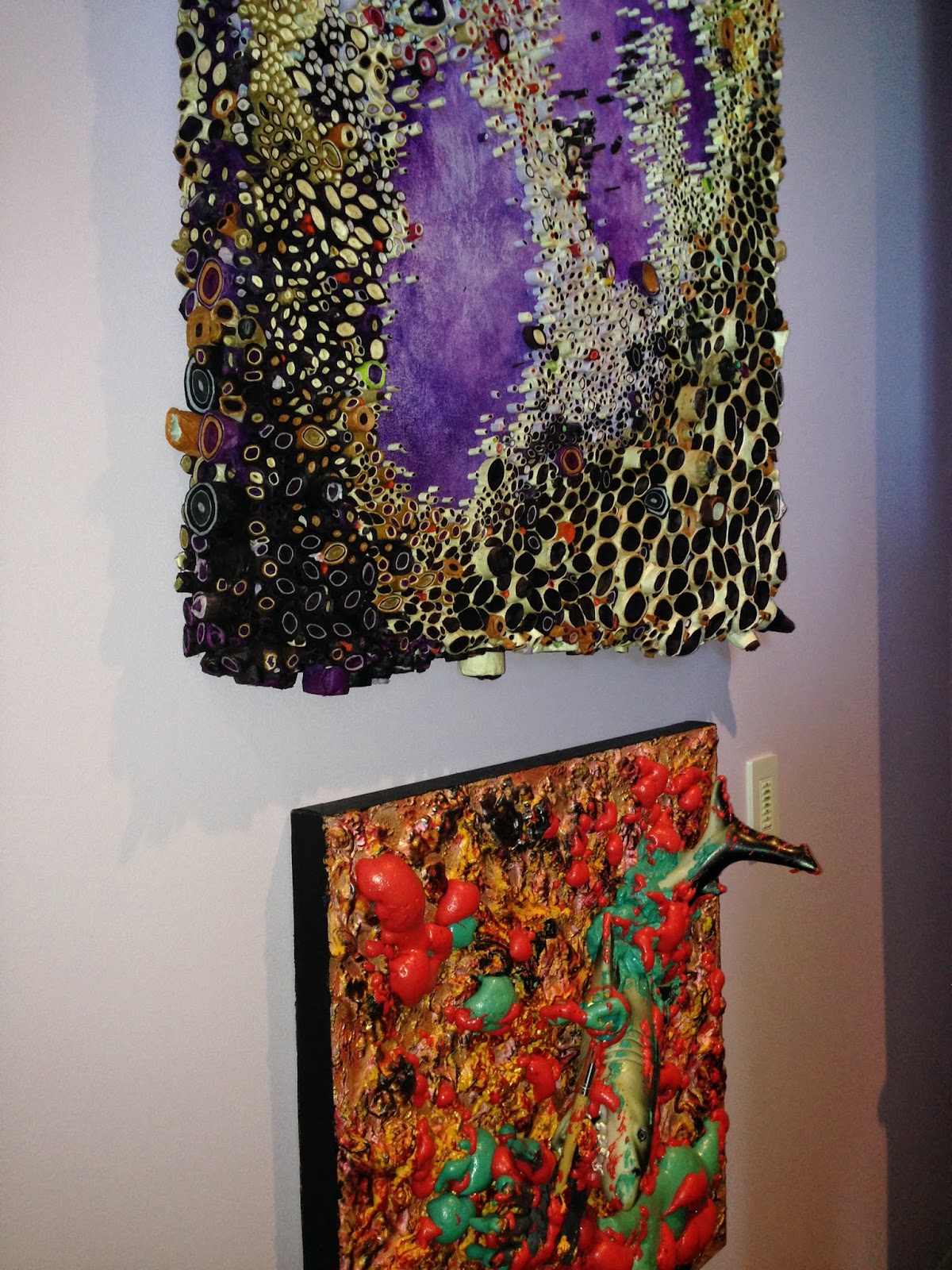 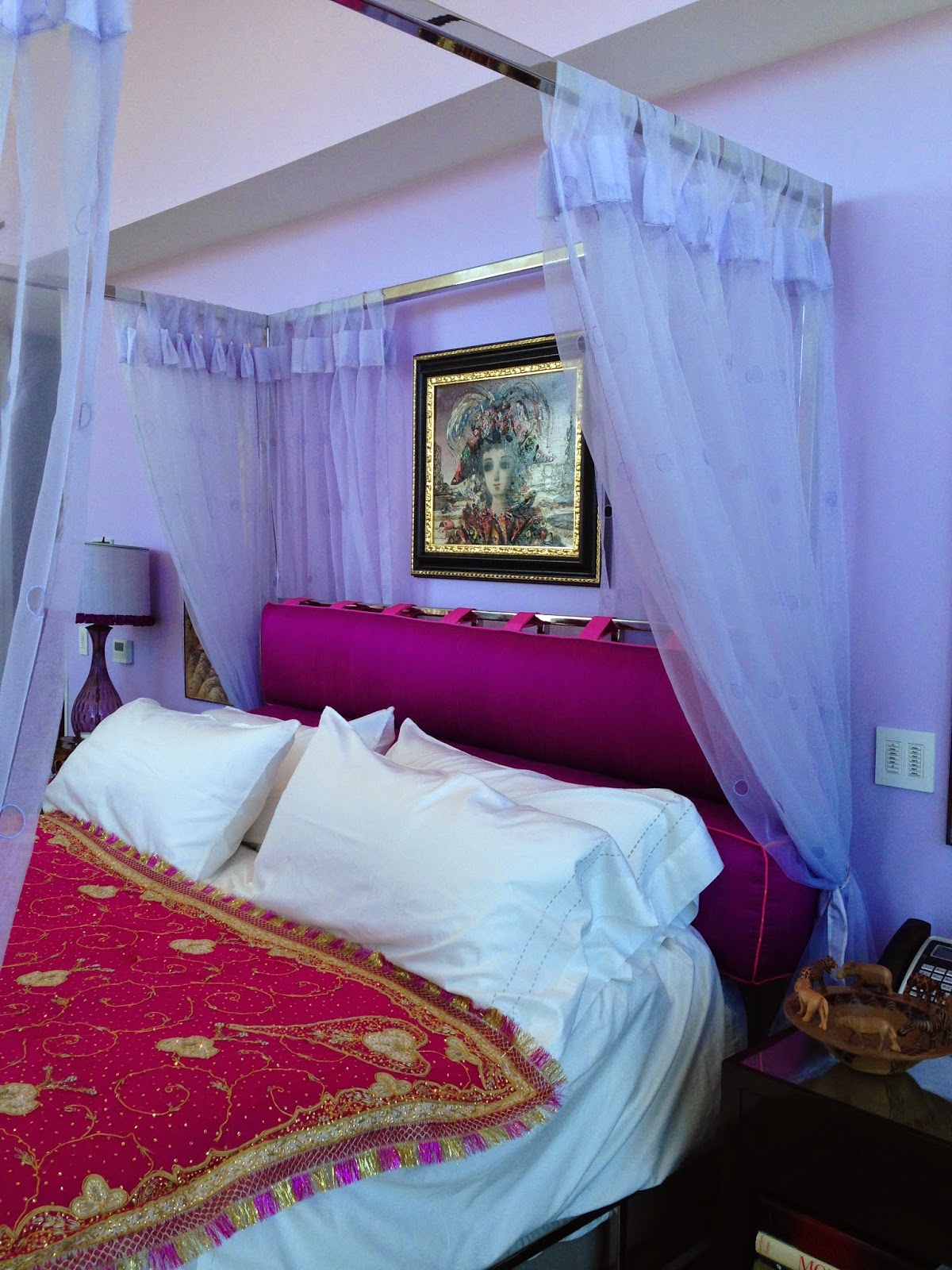 MY PHOTOGRAPHS DON'T DO THIS JUSTICE, BUT IT GIVES YOU AN IDEA. THE ENTIRE PENTHOUSE IS AN ARTPIECE.. Congratulations, Loreen

Posted by Cameron Column at 8:15 PM No comments: