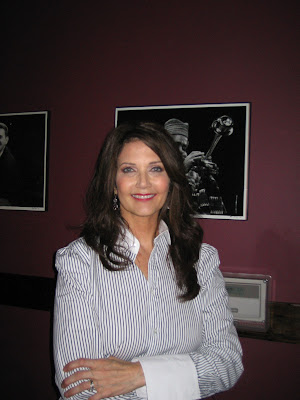 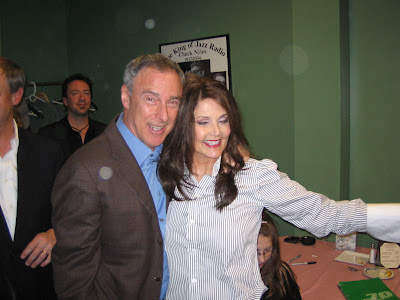 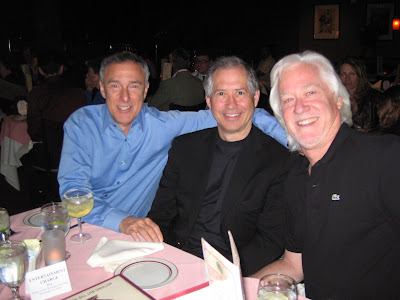 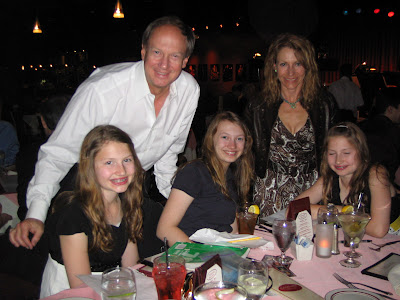 GO TO THE CATALINA BAR AND GRILL ON SUNSET NEAR HIGHLAND TO EXPERIENCE HER MAGIC!!!!
We all know she gained fame as Wonder Woman, which has turned out to be one of the most signifiant role models for young women all over the world. Both Lynda and her character's socio-political impact are immeasurable. But her singing and sassy, irreverent performing style are something you must see. You want to have fun? Go see Lynda. She started out as a singer, and you'll now see why. Her opening night was peppered with an audience filled with LA and Washington's power players like husband Robert Altman, Ernie Del, Harry Sloan, Jerry Bruckheimer, and Kimberly and John Emerson accompanied by their three children Jackie, Hailey and Taylor. Tonight and tomorrow's audiences will be jammed more "sparklies"---(Jackie Kennedy's term, not mine.) And...yes....Lynda's even more beautiful than she ever was.
Posted by Cameron Column at 8:46 AM No comments: 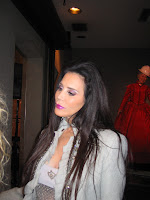 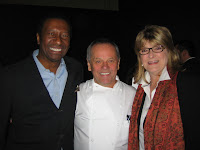 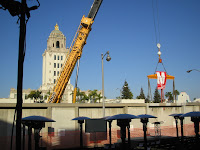 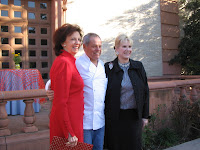 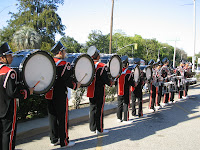 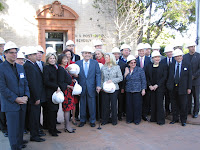 Congratulations to Lou Moore, Wallis Annenberg and all the people who have worked so tirelessly on the project to convert the old Beverly Hills Post Office building between Canon and Crescent into a world-class performing arts center. There will be the Goldsmith Theatre, music, dance, and a children's theatre, along with a sculpture garden, a terrace, a cafe, and children's classrooms. I think this project will become the MOST IMPORTANT project EVER done in Beverly Hills. Architect Zoltan Pali told me, "We are starting to build the underground garage and laying all the electrical. That will take us months, but it's the first step. You can't begin the buildings without this step."
Wolfgang Puck catered, there were three bands, and hundreds of Beverly Hills VIPs including Mayor Nancy Krasne, the Annenberg Board, Wolfgang Puck, Vicki Reynolds ad Murray Pepper, Ali Kasikci (Montage Beverly Hills), Barbara Lazaroff, Ames Cushing, Paul Mazursky, Diane Keaton, Jean Firstenberg, Roz Wyman, Sandy Pressman, Judy Levy, Ruta Lee and Webb Lowe, Margie Peterson, and Paula Kent Meehan.
Posted by Cameron Column at 6:04 PM No comments:

Had a great night at E Baldi! celebrating Julie's birthday with Danielle Allman Del, Linda Thompson, and Donna Antebi. Our Julie is heading off to law school to become a lawyer and put legal power behind her heart power to help the world. God Bless You, Julie.
P.S. The Truffle pizza and truffle agnolotti were to die for! OH YES__Julie is in group photo far right (from Dagny's party!)
Posted by Cameron Column at 12:51 PM No comments:

Get rid of Bill Mechanic and Adam Shankman. Fire new director Hamish Hamilton....missed close-ups, wrong cutaways, half the time you couldn't see the star's face on an entrance. On In Memoriam opening he used a long shot so you missed the first three people who died. And to put Michael Jackson on and NOT Farrah Fawcett! She's done more movies than he, so what a lame excuse it was to say that they omitted her because her success was more in TV. And a stupid horror tribute? Where was the dignity and grace of last year's show? It went with Mark and Conlon. As for ratings they lucked out with the presence of "Avatar." A blockbuster movie year helps ratings, and ABC's ads for the Cyrus-Lautner-Efron hang worked, too. No one begrudges trying to widen a base. Ratings are important, but not at the sacrifice of dignity. And everyone should stop complaining that Oscars shows are long and boring. They ARE. So What? People deserve their due and they have a lot of awards to present. We just want to dish and eat anyway. Congrats to all winners!
And Charlize??? I'm wearing that dress to every dinner party, football game, pajama party----even Joan Rivers' house. (not kidding) Thanks for the ammunition.
Posted by Cameron Column at 12:25 PM 1 comment:

GO SEE ANDREA MARCOVICCI SING HER MOST-REQUESTED SHOW---
LOVE SONGS OF WORLD WAR II
SATURDAY, MARCH 13 8:00 PM AT THOUSAND OAKS CIVIC ARTS PLAZA
www.civicartsplaza.com
"I was doing a small medley of World War Two songs in my act at the Algonquin, and I noticed Walter Cronkite wiping a tear from his eye. We talked after the show about how meaningful it was, and right then and there I decided to create an entire evening about the time in our country's history"----Andrea Marcovicci
Posted by Cameron Column at 12:11 PM No comments:

Played a doctor on "Til Death!" and played bad baseball 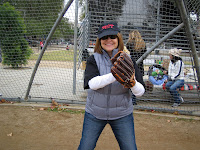 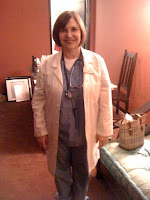 IT'S A DOG'S LIFE-COOPER'S BIRTHDAY PARTY 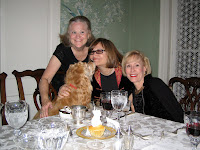 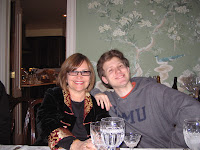 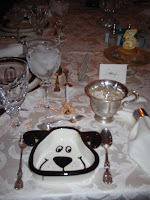 Meg and Jim Wolf's dog, Cooper, is exceptionally well-mannered. Each year on his birthday he is given a sit-down dinner with all the crystal, silver and china you could imagine. His place setting is right on the table with ours. And he eats each course with us, sitting proudly on a his damask chair. I'm serious. And I love it. Pictured are Meg Wolf and Jann McCord, and yours truly with Meg and Jon's son Brian.
Posted by Cameron Column at 6:43 PM No comments: 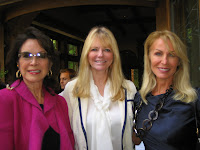 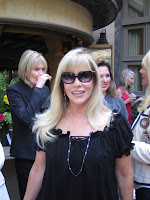 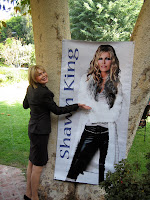 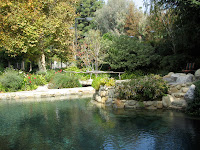 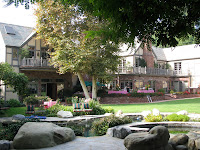 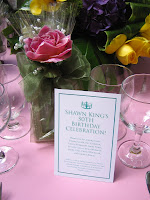 Daphna Ziman opened her lovely backyard for a special 50th birthday party for Shawn King. It was a pink theme, and I actually created a unique drink for the party called "The Shawnie." There were posters and photos of Shawn all over the backyard, including a giant one nailed to a tree. It was a very touching birthday because we went around the room and each woman told Shawn how much she meant to them, or touched their life. I told Shawn I never really liked her.....
There were a zillion party hosts including Irena Medavoy, Kathy Villa, Donna Antebi, and, of course, Daphna Ziman.
Posted by Cameron Column at 6:24 PM No comments: 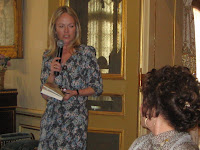 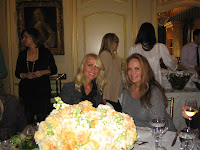 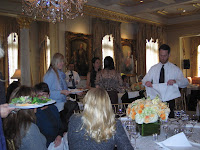 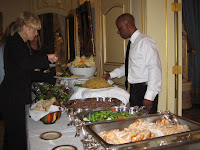 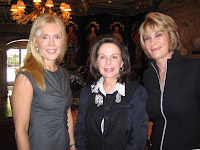 LYNDA RESNICK'S "DEVOTION" LUNCH FOR DANI SHAPIRO
Set at her beautiful Beverly Hills home, brilliant entrepreneur Lynda Resnick welcomed over 50 women pals to meet and celebrate author Dani Shaprio's best-selling book, "Devotion." Resnick, clearly moved by Shapiro's work, wanted to bring a spiritually uplifting speaker to her friends. Shapiro has written two novels and a best-selling memoir, "Slow Motion," and "Devotion" is her personal story of her quest for faith and meaning. A lithe, pretty blonde from Connecticut, Shaprio mesmerized the audience with readings from her book---and with that audience of powerhouse women it was quite a feat. You could have heard a pin drop. Thank you, Lynda, for a very nourishing afternoon.
Posted by Cameron Column at 6:04 PM 1 comment: